As anglers, we tend to focus our attention on the newest reels with shiny bells and whistles. When it’s game time and fish are on the line, everyone wants to be fishing with the best equipment. So it is that in an online world we often overlook the value of a simple reel. While Shimano TLD reels definitely bring enormous advantages to fishermen, they aren’t full of special features. The experience of reel failure and lack of an effective back up will make you appreciate what the Shimano TLD offers. Anglers who don’t care to overspend on a set of trolling reels or a first time setup will also appreciate. 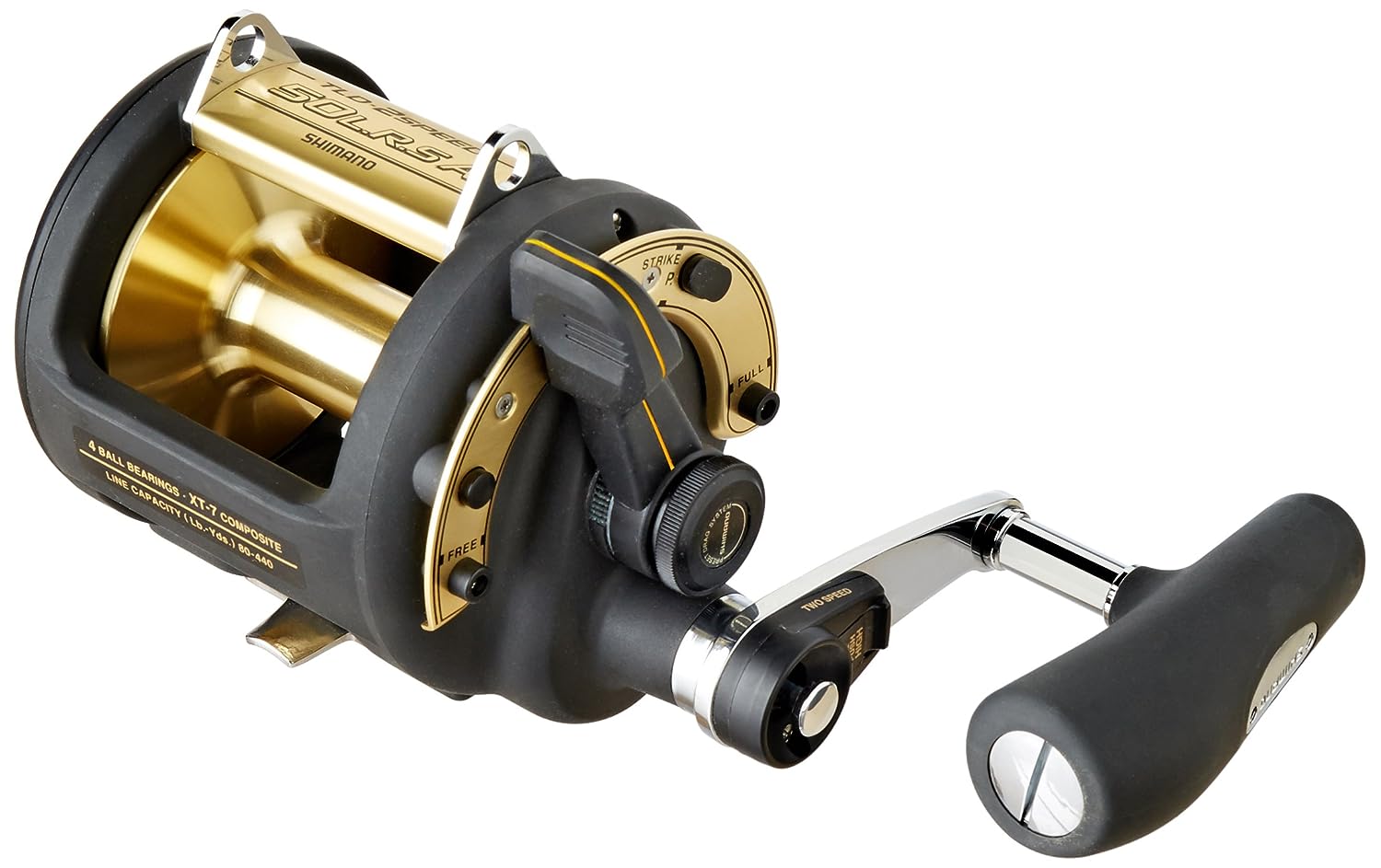 Shimano TLD reels immediately stand out as lightweight conventional models with an incredibly low price tag. No they don’t have the thrust bearings of the Okuma Makaira or the hydrothermal drag system of the Shimano Tiagra. What the TLD series offers is effective simplicity in both single and two speed lever drag reels.

They’re your ordinary average reels with quality AR – Bearings being the top mechanical feature. Graphite frames and side plates keep the reel weight down, as well as the cost. Shimano TLD reels deserve the attention their price range brings, but are they worth the investment? Find out exactly what models are available and what they’re capable of as the Shimano TLD review unfolds.

There are a few specs common to both single and two speed TLD models. Both designs use 4 Anti Rust Bearings without a roller bearing. Instead of a roller bearing, Shimano TLD reels use a ratcheting dog style anti reverse system. All TLD models feature the graphite frame and side plate as well as a durable aluminum spool.

Single speed TLD reels are lighter in weight than the two speed models, ranging from 18.6 – 24.5 ounces. One of the biggest differences between the two reels is their drag capacity. Shimano lists the 2 speed TLD reels as trolling models and they have more max drag. Single speed lever drag TLD reels offer a max drag of 22 to 23 pounds and strike drags of either 17 or 15 pounds. It depends on the size model you get.

A stronger drag system, the ability to carry heavier line, and an extremely low gear ratio separates Shimano TLD two speed from single speed models. Two speed TLD reels move up in drag with a max range of 30-42 pounds. Strike drag ranges from 22 to 32 pounds, depending on the model size you choose, Shimano adds a model to the 2 speed TLD series in the biggest 50 size. You end up with 2 50’s, but one is a long range special or LRSA.

Gear ratios start the same as single speed reels, either 4.0:1 or 3.5:1. Drop them into low gear and get a grinding 1.7:1 ratio. That’ll put some slow steady force on a nice size fish. 2 speed model TLD reels do weigh quite a bit more than single speed versions, ranging between 36.2 and 57.3 ounces.

Both a blessing and a curse. Graphite is nowhere near as durable as high grade anodized aluminum. It’ll hold up fine for years, but eventually the sun and elements will wear it down. Graphite reel frames also have the tendency to twist under heavy pressure. This can cause trouble with gear and drag alignment on the inside.

Benefits of graphite frames include a lighter weight and cheaper material. While graphite may break down over time, it holds up against saltwater like metal frames cannot. Get a chip in that anodized aluminum frame and rusting will occur. Graphite frames don’t have that issue.

In Shimano terms you’ll see them as AR-B, Anti Rust Bearings. These are stainless steel bearings with shield covers that last longer than standard bearings. They are the go to bearing in most of Shimano’s reels as they hold up especially well in saltwater conditions. Remember per Shimano TLD specs that all reels use 4 anti rust bearings. Many anglers prefer a 4 bearing system over the more advanced multi bearing reels. There’s less that can go wrong.

There is a bit of a different design which enhances the drag system of TLD reels. Shimano uses drag springs that activate and push down on a ball bearing. The bearing in turn puts pressure on the drag plate which engages the titanium impregnated washers. This system produces drag across the entire surface area of the washers. The result is even pressure and a smoother, stronger drag.

Dead center of the reel underneath the handle you’ll find the lever drag dial knob. This allows you some leeway with your strike and max drag settings. You can max it out by tightening the dial and take full advantage of your Shimano TLD reel, or back off so that you allow fish some running room.

Since Shimano hails the TLD two speed models as trolling reels, they do come with brackets for troll clips. These are set in all models of TLD reels except the smallest 15 size single speed. The mounting brackets rise up from the top of TLD frames and offer a solid foundation for clipping in your setup. 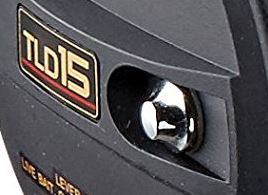 Once you attach your Shimano TLD single or two speed reel into your trolling clips, you’ll want to set the clicker on. This is the typical alarm system that offshore conventional reels use. Set the drag to strike or with enough tension to keep the line from slipping and haul that lure behind the boat. Once a game fish picks it up, the spool will start screaming as long as that clicker is set to on. Not sure? Just pull out some line quickly. You’ll hear it. You’ll also hear it when you reel so don’t forget to turn it off.

Though there’s nothing massive or special in the design of TLD gears, it does provide comfort to know they’re stainless steel. It’s all stainless steel inside the TLD reels. Main shaft, main gear, and pinion gear all comply and give their rust resistant properties to the reels along with their strength. 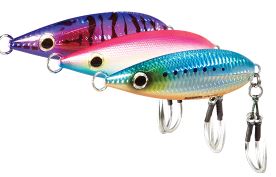 The pros of Shimano TLD reels are evident. Graphite makes a lightweight frame that won’t corrode or rust. Stainless steel insides show quality parts through and through. TLD spools carry plenty of line, more so than you’ll see on many conventional reels. Drags on Shimano TLD single and two speed reels are impressive and offer plenty of resistance against the most powerful species. Shimano TLD reels won’t last forever, but the years of use you’ll get make them well worth the investment.

The graphite frame and side plate show the first area of concern. It’s not necessarily the graphite, but the lack of any reinforcement in the frame to prevent twisting that stands out. Other graphite frame reels like the Daiwa Seagate and Penn Warfare use aluminum rings to support the frame. The lack of any special features isn’t much of a worry because TLD reels are simple yet effective. One exception could be more attention to saltwater protection. The graphite frame is fine but inside bearings and gears will need regular maintenance to prevent failure causing corrosion.

Who Benefits Most From Using Shimano TLD Reels? 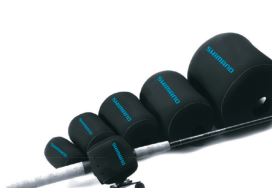 Grab Shimano TLD reels if you need an affordable set for your boats trolling needs. The smaller and medium size models work well for trolling or live bait action. Shimano doesn’t offer a huge range in TLD reel sizes but there are some decent options. TLD reels will work for smaller or larger species of fish, depending on your needs. There’s even the LRSA long range special, the second 50 size model which can handle its weight in fish. Perfect for most medium to medium large offshore pelagic species.

Unfortunately, back in 2014 Shimano quit offering their lifetime warranty. Reels now come with a 1 year manufacturer’s warranty. After you purchase a Shimano reel,  be sure to stop by their website and register your model. There you’ll find all forms necessary if you do need service as well as the locations to send it to. You can also send Shimano an email or contact customer service by phone.

Shimano TLD reels receive top remarks from current and previous owners. From all customer accounts and my own personal use while offshore trolling, TLD reels get the job done. Perhaps one of the most flattering remarks from owners compliments their value. It’s common to hear fisherman say would pay and have paid much more for a reel of only equal performance.

What are your feelings about Shimano TLD Single or Two Speed Reels? FishtFight readers appreciate any additional information you might have to offer. Until next time, Geoff@FishtFight.com signing off.