When anglers take to the offshore fishing grounds with big game species in mind, gear can be a concern. Both rod and reel play a pivotal role in battling large tuna, sailfish, sharks, or any number of powerful fish. If a fish outclasses you, it’s over fast. Saltwater anglers appreciate the peace of mind that comes with a reel that can handle anything. Up there on the top shelf you’ll find the Shimano Tiagra A, a reel that can take whatever the ocean throws at it.

Intro To The Shimano Tiagra A

If there was a Jules Vernes of fishing, his books would foretell a future with reels like the Shimano Tiagra A and the Okuma Makaira. Built to withstand the demanding forces that both fish and elements place upon an offshore reel, the Tiagra A stands out among many. Cast your attention to the details of another Shimano sensation. There’s a lot to tell about the lever drag, 2 speed gearing, gear ratios, line capacities, model sizes, and more.

Shimano Tiagra A conventional reels come in ten models, from the lightest TI12 to the super heavy TI130. You’ve got everything in the middle to match rod and reel to the specific target species. There’s a 12 or 15 which work perfect for inland coastal or in shore kelp bass fishing.

Your offshore use falls between the TI20 and TI80 depending on the size and species you encounter. Giant marlin, shark, tuna, and sailfish call for the extra heavy TI130. Check the model numbers as they appear below. Note that the W = Wide Spool and the LRS = Long Range Special and have stronger drags.

Check Tiagra A Prices On Amazon

With ten different models and several mechanical systems, the specs on the Tiagra A offshore reels pile up. Starting with line size, the lightest TI12 allows 880 yards of 12 pound mono. That’s the lightest the series goes and you can see the spool wraps a lot of line. 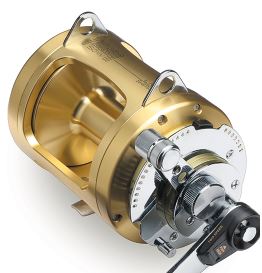 Going heavy with the TI80 moves you up to 950 yards of 80 pound mono, or jump to 1000 yards of 130 pound test with the TI130. All Tiagra A reels rate for braided line if you can imagine even more yardage.

How much does a reel weigh that can hold so much line? The TI12 scales in at 34.6 ounces while the heaviest TI130 weighs a whopping 174.1 ounces. That’s one for the belt and harness for sure.

When it comes to putting the brakes on hellbent fish, the Tiagra A series offers a max drag range of 29.5 to 99 pounds of resistance. That’s devastating force and can pull the hook right out if you’re not careful. The reels do have a max strike setting for smooth transitions from free spool to hook set.

Three Tiagra A models, the TI 12, 16, and 130A, have a 6 ARB system while the remaining 7 models spin on 4 ball bearings. The higher gear ratios go to the smaller size reels at 3.9:1. That’s fast enough to pop a lure on the surface. They switch to low gear when necessary and crank at 1.7:1. The heavier reels switch even lower but don’t go as high in the faster gear. 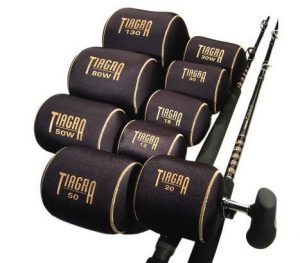 Features are where things get interesting when inspecting a fishing reel. Do they match the qualities you need or are they a waste of money?

The Tiagra A 2 speed lever drag reels have no shortage of features starting with their golden all metal frames.

Tiagra A reels are a part of Shimano’s Metal Series and they also employ their rigid Hagane body. The one piece metallic frame provides a sturdy encasement that keeps inner components from shifting out of precise alignment.

Add to that the extra rigid Hagane Body design, and you get a purposeful reel that will not flex under any condition.

Some Tiagra A reels use 6 bearing while the others use 4, but they all contain A-RB technology.

The special treatment of these bearings give them an anti corrosive property that’s said to last 10 times longer than normal bearings. 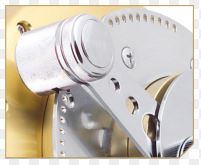 Some lever drags are smooth and don’t ratchet. Most have maximum strike settings at the very least. Tiagra A reels have everything.

There’s a drag knob that clicks in half pound increments for precise setting. The lever drag also clicks back and forth in millimeter size increments for exact adjustments during long fights.

The self lubricating drag washers are impervious to saltwater and instantly engage with smooth operation. Conventional reels face problems due to extreme heat when handling offshore beasts, many times repeatedly in a drawn out battle. Tiagra reel design includes a hydrothermal drag to address this exact issue. Heat can warp a drag and put it out of alignment. The hydrothermal feature makes constant adjustments to offset any drag changes incurred because of temperature.

The option to throw your reel into high or low gear is a huge deal when fighting the fish of a lifetime. The transition from high to low gear or vice versa is equally important. The inter meshing of gears keeps one from disengaging until the other sets in. There’s never a hiccup when changing gears.

The main features of the reel cover a lot of ground but smaller ones can make a significant difference. Take the ergonomic rubber palm grip, made with a special tack to do away with sweat during hours of battle. Some digging reveals that Tiagra reels use a twin pawl anti reverse gear system, although only 1 gear shows on Alan Tani disassembly. It may be the difference between the TI130 and smaller models.

Also worth mentioning is the clicker, sounding off with higher decibels than any other offshore model. Of course you have clip rings on top of the frame for easy attachment to trolling straps and reinforcement in the aluminum rod clamp.

Tiagra A reels have a spectacular gold finish which applies the anodizing process. Short of any big chips in the finish, the aluminum will withstand rust for decades. Handles on Tiagra A reels counter balance upon rotation to help anglers from getting stuck around each turn.

Find Your Tiagra On Amazon 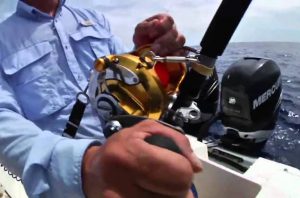 Even on the lightest models, Shimano Tiagra A reels dominate the bigger specimen of any species. That might mean putting the wood to 600 plus pound marlin with a TI130A, or pulling 10 pound calico bass out of kelp beds with a TI15.

Having the option to switch into low gear reduces the time on drawn out fights and can make the difference between landing a trophy or losing it. The design and material make of Tiagra reels intend a lifetime of use with proper care and maintenance. 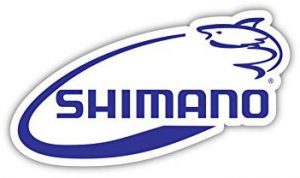 Reels that come with a gear ratio no higher than 3.9:1 won’t provide enough speed for many vertical jigging situations. They also lack the speed for surface action when fish want iron to fly fast.

When it comes to fly lining live bait or trolling, no reel compares. You’ll pay one time for the price, and have to decide if the extra bucks on the tag are worth the investment.

What Kind Of Angler Matches Up With Tiagra A Reels? 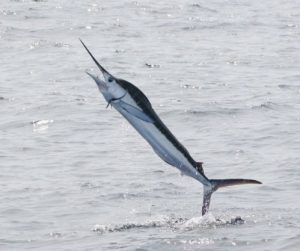 Shimano Tiagra A reels make great additions to any yacht, big game competition boat, or heavy offshore fishing charter. The smaller models go for personal use though long range anglers may prefer a cow fighter of their own. Long range charters usually provide the bigger rods and reels but serious anglers sometimes prefer to own their own equipment. Smaller model Tiagra reels are reasonable enough in price but find a way to write off the larger boat models.

Support for any Shimano reel is superior to most, but Tiagra owners get extra time for their purchase. Shimano shows that it understands the investment and gives a 10 year warranty for Tiagra reels. Add to this the service centers that Shimano supports around the world, and you’ll never have to ship far to resolve any necessary repairs.

Overall Ranking: 93 out of 100 anglers approve of Shimano Tiagra A reels. 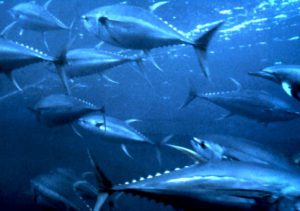 The Shimano Tiagra A goes way beyond the usual needs of saltwater anglers and it does not mess around. The smaller models are even big, and can handle giants where light line is mandatory. The price matches the investment of Tiagra A reels, but they’re well worth it if the determination is already there.