The Okuma Makaira began with a vision described using four powerful words: Design, Drive, Drag, and Durability. Okuma set out to change the standards of deep sea reel design by concentrating on performance against the most powerful pelagic species. Scroll on down for full disclosure and find out if the Makaira lives up to its hype.

Known for its brilliance in offshore fishing, Okuma worked in tandem with Tiburon Engineering to create the Makaira. Several new patented features evolved as a result of this union helping to deliver a baitcaster worthy of large sharks, full grown tuna, and sailfish.

The care in part selection and sheer amount of “packed in” features offer anglers a competitive edge against species that often “win the fight”. A Carbonite Dual Force Drag system and patented Thrust Bearings provide examples of two such features sitting atop a plentiful list.

Okuma manufactures the Makaira in two different releases. The standard Makaira and the Makaira SEa (special edition) which can both be purchased by anglers in 7 models that range in size from 10-130. Makaira models are as follows from smallest to largest:

Okuma also offers the Makaira SEa Special Edition reel making it available to fishermen in the same sizes and models as the standard Makaira. The regular model and the special edition can easily be identified by the gold color of the Makaira and the gun smoke appearance of the Makaira SEa.

The gold colored Makaira has an attractive Marlin etched on the sideplate while the gun smoke SEa sideplate outlines a striking yellowfin tuna. The special edition model goes by the exact same model numbers but has the noted SEa ending.

Check Price And Specs On Amazon

Makaira specifications cover a lot of distance which gives fishermen a wide spectrum of target species. Starting with the smallest MK10-II, anglers get a spool capable of holding 460 yards of 15 pound monofilament line. The largest MK180-II can spool an impressive 400 yards of 80 pound test.

Okuma Makaira gear ratios make for power more than speed though smaller models crank noticeably faster. Keep in mind that all Makaira models come two speed equipped with low and high gear ratio’s. The MK10-II cranks at 4.7:1 in high gear and 2.1:1 in low while the largest MK180-II claims 2.2:1 and 1.2:1 ratios.

Makaira reels sit heavier in the hand than many saltwater baitcasters. They start at 26.1 ounces in the lightest 10 model and move up to 167 ounces in the largest 180 reel. The lever drag offers incredible resistance and max drag ratings in two different positions. The strike setting allows fish to run tired at which time the full setting can be employed to finish the battle.

There’s a long list of technological features which makes the extra weight of the Makaira understandable. The Okuma Makaira has features built into every function of the reel making it an offshore powerhouse. Take a look at these rod bending technologies:

The highest grade aircraft aluminum chosen for strength and durability make the frame and sideplates of the Makaira. A patented coating covers all open surfaces and adds an anti corrosive property to each reel.

Every Makaira reel in both the standard and special edition models come 2 speed equipped. Gear ratios change between models so be sure to check exact specifications to match your needs.

No more struggling when securing line to the spool. The Okuma Makaira puts an easy tie pin on the spool which facilitates attachment or braided line.

Incredible slowing power (drags are never meant to stop fish) with precise drag settings give fishermen added advantage during tough battles. The lever sets into either strike or full position and the dual drag uses Cal’s universal grease for constant lubrication. A cam knob beside the handle adjusts the strength of the lever drag. 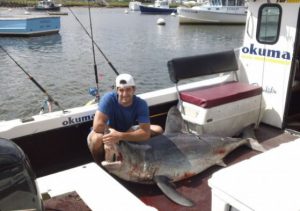 Fighting powerful fish on heavy drag settings puts a beating on offshore reels and brings out their weaknesses. Heavy force placed on a reel can bind the gears or push the spool into the frame. Thrust bearings serve to alleviate this pressure enabling better performance during pivotal moments of extreme fishing bouts.

A sturdy aluminum handle ends with a rubber grip T-Bar which spins on a graphite insert roller. The T-Bar lays across an angler’s entire hand providing a natural grasp as opposed to the eagle claw grip forced by knob type handles.

All Makaira reels feature a heavy duty clicker which ratchets for precise tension control. Strategically placed drain holes prevent water from overstaying its welcome which adds another anti corrosive element to the reel. Specially designed screw ports protect the hardware and prevent the build up of grime. 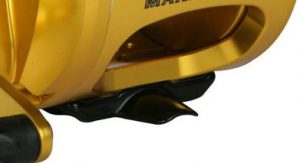 A well placed thumb rest on the lower crossbar improves reel grip while fishing and gives that opposable digit a place to go. A hard anodized aluminum reel foot and clamp provide faithful attachment to your favorite offshore stick.

The special edition models match the standard version Makaira reels in features but come with a few additions: 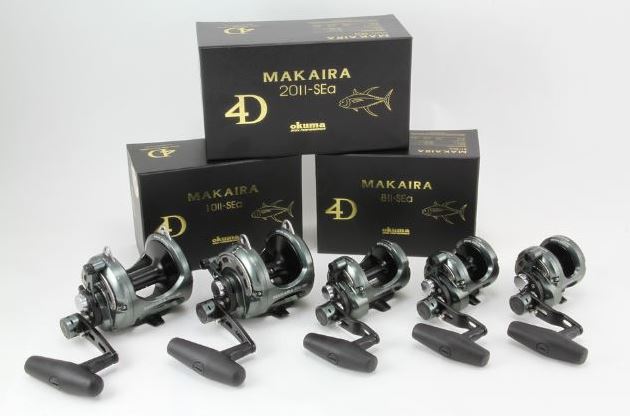 Open spool bearings added to the SEa increase spool speed up to 2 1/2 times of the standard Makaira. These extra spool bearings come lubricated with TSI-301 oil.

Pros And Cons Of The Okuma Makaira

There’s not much I can say that hasn’t already been revealed by the feature descriptions. The Makaira baitcaster brings exactly those four words seen by Okuma’s original vision. 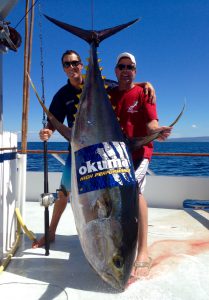 Design – The design team put the Makaira down on paper first. Tiburon engineering pitched in coordinating ideas into possibilities. Countless hours of preparation went into the Makaira before manufacturing began.

Drag – The carbonite dual drag system brakes like a charm but the controls round out the entire system. Fine tuning capabilities allow fishermen to take advantage of the drag’s full potential.

Durability – The Makaira baitcaster lasts for the long run with parts and design that support endurance. Not a single reel system goes without strong anti corrosive measures making the Makaira a lifetime product.

Reels get heavy after hours of use on the ocean and the Makaira isn’t built light. Match the Okuma Makaira MK-30II with the Shimano Trinidad TN30A and you see what I mean. The Makaira weighs 30 ounces while the Trinidad weighs 20.5 ounces. They are different reels but what a huge difference.

Makaira reels aren’t made to be fast and low gear ratio makes it hard to get action from surface iron. The Makaira will cast ok though it’s definitely not a strength.

What Fishing Purpose Is The Makaira Best Suited For? 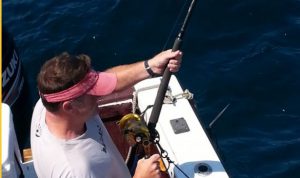 Offshore anglers’s using live or chunk bait for the largest pelagic species would do well to consider the Makaira. Another proper use for larger Makaira models would be on the stern as a troll reel. Pick up a Marlin or Wahoo on the search and drop the Makaira into low gear to finish the fight.

Any questions about the reel are gladly fielded by Okuma through their website. No other reel I’ve heard of offers a 5 year warranty which shows Okuma’s dedication and commitment to the Makaira.

The Okuma Makaira beast of a baitcaster slams down the locker on the most powerful ocean species. Make short work of Thresher Shark, Swordfish, or trophy Yellowfin Tuna with a reel made to do it. The weight, low speed, and price must be considered but I believe the Okuma Makaira offers top value when put to the proper use. If you’ve used the Makaira or have an opinion on it I’d love to hear. Leave a comment below.