Perhaps you remember the old Release model reels or maybe you know the Truth label. Newcomers to these names call them SEiGLER Reels but the facts don’t change. If you’re looking for near perfection and a lifetime of use in a conventional reel, the SEiGLER LG can’t go without consideration. SEiGLER manufactures all its reels in the USA with the highest standards in quality. They also back every reel with a Lifetime Warranty showing a true commitment to keeping anglers on the water.

Price: Middle to a high-middle range.

Intro To The SEiGLER LG Reel

Technology seems to grow by leaps and bounds with the passing of each year and fishing gear is inclusive to that statement in every sense of the word. Rods are getting thinner and lighter. Reels are becoming smaller and also lighter, but neither lose any of their ability to perform. In many cases, fishing equipment today is even stronger and more durable than ever before.

With the use of braided fishing line, anglers can gear down and make things lighter without sacrificing too much power. SEiGLER SG & SGN (Small Game & Small Game Narrow) exemplify lighter reels packed with plenty of power. But as every seasoned saltwater angler knows, situations will arise when the small game reel is not enough. Move up to the SEiGLER LG and your chances of being outmatched drop significantly.

SEiGLER manufactures its Large Game reels in a standard and a narrow size spool. Both models are available, depending on current stock levels, with left or right hand retrieve. Colors come in Red & Smoke, Silver & Smoke, or Blue & Smoke.

SEiGLER Reels provides a useful three category breakdown of the LG & LGN specifications. They give reel info based on Dimensions, Capacity, and Performance.

Dimensions – The SEiGLER Large Game Reel uses a standard size spool. The reel itself is 2.75 inches in diameter and weighs 20.2 ounces.

Capacity – LG Reels function using either mono or braided line. They hold up to 525-yards of 20 lb monofilament or 80 lb braid.

Performance – This category describes the drag rating, inches per crank, and bearing count of the reel. The lever drag on the LG has 23 lbs of drag at strike and 35 max. It operates on a smooth 9 bearing system with a gear ratio of 6:1, pulling in 52″ of line per crank.

Dimensions – The SEiGLER Large Game Narrow Reel is slightly smaller than the LG model. It has a diameter of 2.5 inches and drops to 16.8 ounces in weight.

Capacity – SEiGLER rates the LGN model for use with braided line. It fills up at 375 yards of 65 lb test.

Performance – As far as performance goes. the LG & LGN reels have the exact same specs. The LGN offers 35 lbs of max drag, 52″ per crank, and uses 9 bearings as does the LG. It also spins with a gear ratio of 6:1.

SEiGLER Reels in LG & LGN models feature a single piece frame of aircraft grade 6061 T6 aluminum. Able to withstand the pressures of giant gamefish screaming against its drag, the rigid frames allow no twisting. This keeps the huge stainless steel gears in their precise position so they can crank when needed most.

Speaking of Stainless Steel, SEiGLAR enhances the size of the main shaft and drive gears to add even more power. Though small in stature compared to reels in the same performance level, LG & LGN models crank under heavy duress.

A quality reel must have performance bearings and SEiGLER chooses 9 ABEC-5 rated ball bearings to do the work. You’ll notice a difference in smoothness while casting and retrieving due to the ceramic spool bearings. Stainless steel bearings support the inside but ceramic makes for smoother spool performance.

Like all quality offshore reels, SEiGLER LG & LGN models use a multi carbon-fiber disc drag system. While providing a more than substantial 35 lbs of drag at full resistance, the range moves by detent down to 23 lbs at strike.

The detent system allows the lever to secure into place as it lands on each tab along the arc of its path. Notice also the spool tension knob with the SEiGLER Signature Symbol on top, used to adjust the free spool of the reel.

Another useful feature SEiGLER includes in the design of their LG & LGN models is a Strike Button. The button protrudes from the lever detent system right in the strike range of 23 lbs. As you move the lever above or below strike range, the button pops back out. It prevents the lever from moving too much unless the angler presses the button.

The inner components of LG reels use a dual anti-reverse system. Anglers have the instant hook setting ability of the one-way stopper bearing, aka an anti-reverse bearing. As a backup, the reels include ratcheting teeth and pawl systems known as dog gear anti-reverse. They do make a slight clicking sound on the retrieve but are worth the extra support against an angry gamefish. 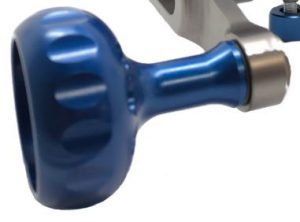 Part of the incredible cranking power of the LG reel comes from its extra-long crankshaft. Stock models come with a palm style round knob made out of aluminum, but the handle provides the power.

Every bit of that extra length on LG reel handles gives anglers better cranking leverage. Though the round knob is effective, anglers often replace it with a T-Bar grip.

Finishing touches of LG & LGN reels are a loud clicker and rod clamp. Like most conventional reels, the clicker is on the side opposite the handle. SEiGLER LG rod clamps fit the majority of offshore rod blanks, with dual screw sets that fasten down firmly into place.

SEiGLER makes LG models in the same vein as their Small Game reels, light yet extremely powerful. 23 pounds of drag at strike and 35 at full provides enough resistance to handle heavier species. Homeguard yellowtail, tuna, and east coast striper are all on the menu when fishing LG reels. They offer a step up in power and line capacity from the already strong SEiGLER SG models. SEiGLER makes all reel parts in the USA with the exception of the bearings and every model comes with a Lifetime Warranty.

For beginners or very infrequent anglers, the cost of SEiGLER LG and LGN reels may be a drawback. Conventional reels with quality aluminum frames as well as stainless steel components don’t come cheap. Though the reels offer incredible value and are a one time purchase, they’re likely out of budget for many fishermen.

There’s not too much to complain about as far as the design of the reel except for the handle. The extra length is great but the knob could definitely use replacement. Consider going with a larger Power Knob or T-Bar handle as seen on Amazon.

LG models are mechanical beasts when it comes to fly-lining live bait or jigging for tuna or jack. They also make a fine choice while dropping a Shimano Flat Fall Jig. On the other hand, throw a Tady Surface Iron or Shimano ColtSniper on the end of your line using the Large Game Narrow model. The deeper narrower spool lends itself much better to the long jig rod than the wider standard model. 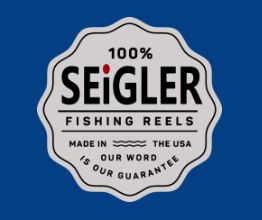 When you pick up a SEiGLER Reel, along with it comes the highest standard of customer support. The whole concept of the LG and SG Reels, along with their narrow spool counterparts, is a lightweight yet powerful performance. In doing this SEiGLER keeps the mechanical design of the reels simple. It makes maintenance easy for the owner as it does with repair should you need to use the Lifetime Warranty. Visit the SEiGLER Fishing Reels website for full details.

SEiGLER Fishing Reels has a following that dates back to its earliest days with the Release label. They changed to Truth before finally settling into the SEiGLER brand name, but the real truth is that the reels have only become better. As any authentic company should, SEiGLER continues to learn and strive for excellence. This quality is apparent in the LG and LGN Reels, making them an easy choice for any avid offshore angler.

Do you have a question or personal experience using SEiGLER Large Game Reels? Please spend a minute and drop a line in the comment section below. You’re sure to catch another angler’s attention and FishtFight returns all genuine communications. Thanks for reading and tight lines until next time. FishtFight.com.