Many offshore anglers burn the midnight oil in hopes of hooking that trophy tuna, yellowtail, or dorado. Graphite reels are always a big concern because they tend to flex under heavy pressure. On the other hand they prevent rust and keep the weight down. The Okuma Cortez star drag reel provides the best of both worlds. It uses a graphite frame, graphite side plates, and features a mechanical stabilizing system. 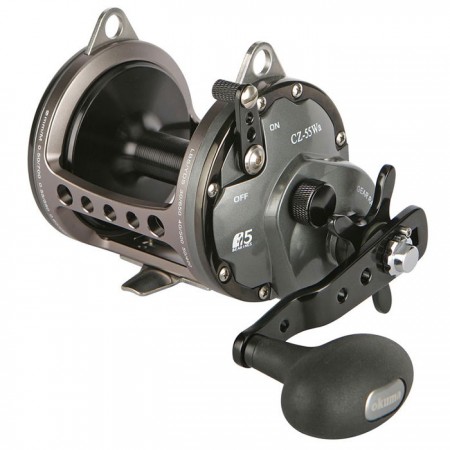 A lightweight frame and reinforced gears make the Okuma Cortez an attractive reel and the low cost makes it even better. Add to that a slough of other prominent features and the true value of the reel becomes apparent.

Okuma Cortez star drag reels come in 4 models for anglers to choose from and all work on a 5 bearing system. The systems include four stainless steel bearings and one anti reverse bearing. Take note that one of the models does offer an aluminum frame though it keeps the graphite side plates.

The CZ-55Wa features the aluminum frame and graphite side plates. The heaviest graphite reel weighs ten ounces less than the aluminum model but to be fair the aluminum CZ-55Wa is a much larger reel.

The CZ-55Wa is the largest reel in the line and can hold up to 600 yards of 30 lb monofilament line. By contrast, the largest graphite model holds 300 yards of 30 pound mono but weighs about 10 pounces less. The smallest model comes with a spool that goes as light as 410 yards of 14 pound mono.

Okuma Cortez reels weigh between 14 and 28.3 ounces. The 3 graphite models are fast reels with a gear ratio of 6.2:1 but the aluminum frame model slows to 4.7:1. Maximum drag ratings are 14 pounds in the lightest model and 18 pounds in the 3 larger models.

The Okuma Cortez star drag reel puts forth its mechanical stabilizing system as the main feature but it doesn’t stand alone. A dual anti reverse system and a magnetic control system for casting are among the other features that help make the Cortez a performance reel. Have a look at the reel’s key features that add to its overall value.

Gear support is nothing new for conventional fishing reels. Companies like Shimano have integrated gear support into the aluminum frame of reels like the Talica. The Shimano Trinidad goes even further by adding their X Ship technology which supports the pinion gear on both sides.

The MSS in the Okuma Cortex puts a metal plate inside the reel and is designed to support all gears, gear shafts, and the bearings. The Daiwa Seagate puts aluminum rings on the outside of its graphite frame. This surely helps to reduce reel twist but doesn’t compare to the support offered by the Okuma Cortez.

The MCS controls casting by slowing the spool which helps reduce backlash. Offshore anglers that reach expert casting level prefer not to have systems that slow the spool. Their touch on the spool while casting is so precise that these systems prove a hindrance, and only shorten their casts.

For the beginner or intermediate, a magnet control system means more fishing time due to reduced backlash. It’s much easier to control the line on the spool with these kinds of systems. Note that the MCS cast control system does not come on the aluminum frame Cortez model.

This is a standard with offshore conventional reels though worth mentioning just so readers know it’s there. Avoid bigger game saltwater reels that don’t have a multi disc drag system. Check out the Okuma Makaira to see truly powerful drag system.

The Okuma Cortez star drag reel uses both a dog and one way roller bearing for anti reverse purposes. So many reels avoid using both systems and would rather use one or the other. Roller bearings give instant locking which anglers prefer and they are also silent.

Dogs or mechanical teeth hold better but have some play before they lock and make a clicking sound while reeling. It’s better to have two systems because if your anti reverse goes out, you won’t be using that reel till it’s fixed.

Readers can see the drop down box under and behind the handle on the image of the reel. Bigger gears relates to more reeling power under heavy loads and boosts Cortez performance for big game species.

This doesn’t mean that you won’t have to eventually add grease. It simply means that the reel spreads the lubrication when used. This is a helpful addition especially in saltwater conditions. It won’t keep particles out, but it will protect the inner parts from rusting.

Okuma Cortez reels grind with a comfortable ergonomic grip attached to the end of an anodized aluminum handle. The knob fits perfectly in the palm of your hand and the arm uses the cranking style which brings it closer to the reel frame.

As previously stated, all models use a 4 + 1 anti reverse bearing system Cortez reels use an anodized aluminum spool with an inner shaft that is also supported by the stabilizing system.

The reels place the bail lever in the usual top position and all but the CZ-55Wa have a cast control knob just under the handle. The star which controls the drag setting is made of forged aluminum and the handle is anodized aluminum.

The price of the Cortez lists first among the pros and you’d be hard pressed to find a cheaper offshore conventional reel that offers the same performance. The magnetic cast control makes casting easier which really helps those who are learning to throw a baitcaster.

The biggest feature of the Cortez is the MSS because it greatly improves the power capabilities of the reel. Anglers wouldn’t want to fight big fish without it.

The cheap price of the Okuma Cortez star drag reel means the parts will not endure decades of use. They’ll hold up for 5 – 10 years depending on the amount of use and maintenance put in.

Another drawback of Cortez reels is the low max drag on the heavier models. It would be nice to see that 18 move up to 20 or 24 on the two larger Cortez models. It’s also a shame that Okuma didn’t put some kind of saltwater protection feature into Cortez reels. This was likely a decision based on cost.

Who Is The Okuma Cortez For?

Beginners and anglers on a tight budget should take a very close look at this reel. If you need some gear and your not convinced about how much you’ll use it, the Cortez makes a good choice. These reels make great backups that don’t cost too much. Throw one in your bag for overnight trips just in case something happens to your go to power reels.

Okuma offers dependable reel support within the USA with several service centers listed. Okuma Reels fall under either a 1, 3, or 5 year covered period and the cheaper Cortez gets the 1 year warranty. There is a simple reel registration process that anglers should complete on the Okuma website immediately after purchase.

Overall Ranking: 89 out of 100 users approve of Okuma Cortez Reels.

Don’t expect a masterpiece in the Okuma Cortez star drag reel because they aren’t like expensive models. They are fantastic mechanical creations for starting offshore anglers and provide an excellent inshore reel. For offshore purposes consider either the larger of the graphite models or the aluminum framed model.

Have experience with or further questions about Okuma Cortez reels? Leave a comment below and I’ll get back to you in a flash. Thanks for joining the conversation and tight lines to all.