Anglers favor Okuma Andros single and two-speed lever drag reels for their jig fishing abilities. A low profile design offers a comfortable feel on the rod, but dual anti-reverse seals the deal. Important when dragging iron through water at high speeds, dual anti-reverse systems offer protection against failure from strong and instantaneous forces. Add to that a ratchet lever drag, high-speed helical cut gears, a one-piece aluminum frame, and we’re just getting starting. Jump right into the following review with a light on the Okuma Andros Single, Two Speed, and the Special Edition lever drag reels.

Lightweight aluminum framed reels with high-speed gears are a huge hit in the world of offshore fishing. As more anglers switch to a braided line or braid with backing, smaller reels become more attractive. For those that desire a reel that can deliver speeds necessary to incite game fish into striking, the Okuma Andros makes a fine offering.

A 6.4:1 gear ratio is fast for an offshore lever drag reel. Yet, it’s the combination of high speed with a dual anti-reverse system that reinforces the capabilities of these reels. You can forget about any back play in the spool, or have to worry about mechanical failure. What else? There are plenty more features to discover when it comes to Andros reels. 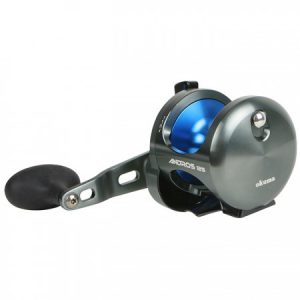 Okuma rates line to spool capacity by precise diameter measurements instead of the general pound test that most manufacturers use. It gives you a more accurate reading. Monofilament in a 20-pound test can differ in diameter from brand to brand.

As for drag, the lighter two models are the same. 12 pounds of resistance in the strike setting on the lever drag or 24 when you slam it down all the way. The larger A-12S has a strike setting of 27 pounds and maxes at 34.

There are a lot of differences in specs from single to two speed Okuma Andros reels. First, you have two narrow options in the A-5NIIa and the A-12NIIa. There’s the middle size A-12NSIIa model, but there’s also the larger A-16IIa model.

You can visit the Okuma USA website for the line ratings of each model, but one point of interest stands out. As you move up to the size 12 and 16 models, the spools don’t rate for larger diameter line. They simply offer more line at the same diameter.

Two-speed reels tend to weigh more than their single speed counterparts. Okuma does manage to make the difference slight in their Andros line. The lightest size 5 narrow two-speed reel weighs 14.8 ounces and the heaviest size 16 model weighs in at 30.1 ounces.

Bearing count on Andros reels stays constant with a 7 bearing system, but gear ratios must change in the two-speed models. They each have two different gear settings for one thing. Beginning with the lighter reels, size 5 models keep the fast 6.4:1 ratio in the high gear setting. They drop to 3.8:1 with a click to low gear. The 12NSIIa and its narrow option also offer 6.4:1 in high gear, but drop further down to 2.1:1 in low gear. Go with the A-12IIa for a more moderate 4.7:1 high gear ratio while keeping the 2.1:1 in low gear. Finally, the size 16 two-speed model offers 4.3:1 in high speed and a very low 1.3:1 when you click down.

The last specs to go over are the drag settings. On the light size 5 two-speed reels, you get a strike resistance of 15 pounds with and a max drag of 24 pounds. Size 12 models strike at 27 pounds and max at 34. Lastly, the largest size 16 reel strikes at the same 27 pounds but maxes higher at 48 pounds of drag.

For precision light line fishing, some anglers may prefer the dual force drag of the Okuma Andros Special Edition models. With a limited two size option, Special Edition reels keep many of the specs of the other models. Both size 12 and 16 SE models use the 7 bearing system and offer a 6.4:1 gear ratio. As for weight, the size 12 SE reel is 24 ounces and the size 16 weighs 30.6 oz.

View All Andros Reels On Amazon

Frames of the Okuma Andros reels are all one piece construction with a single side plate. Using 6061-T6 machined aluminum, Andros reel frames won’t flex under extreme pressure. Two speed and SE models finish the aluminum with their CRC (Corrosion Resistant Coating) process.

All Okuma Andros reels feature the use of a multi carbonite disk drag system. Drag washers use Cal’s drag grease for long-lasting lubrication. Special Edition models also use carbonite drag washers but take it a step further with the addition of the dual force system.

The bearings that assist the rotation system are ABEC-5 rated. A Japanese product, the bearings are stainless steel with anti-corrosive properties. Nowhere does Okuma state that the bearings have shields.

One of the features of the Okuma Andros reels that makes them so popular for vertical jigging is the dual anti-reverse system. This includes an anti-reverse bearing that provides an instant stop when the drag engages. A ratcheting mechanical system gives the second source of anti-reverse. These are teeth that slip one way but lock in the reverse direction. 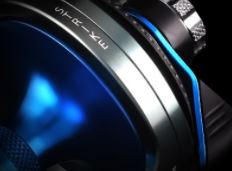 Andros reels make use of a comfortable lever to adjust the drag setting. Running back and forth on a ratcheting system, you can easily change the drag setting in the middle of an intense battle. Okuma also puts in a segmented guide so you can see exactly where you have your drag set.

Lighten resistance on the free spool or tighten it up for better cast control using the adjustment knob. You’ll find it sitting right beside the base of the reel handle. Turn it righty tighty and lefty loosy.

Gain access to the Andros’ inner workings and add grease or do maintenance by undoing a single bolt on the side plate. Be sure that bolt tightens back up nice and firm as it is also the only one holding the side plate in place. 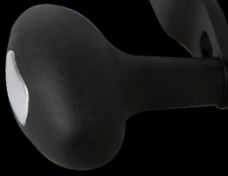 The handle ends and spins with a comfortable Ergo grip.

Oval in design, it grips perfectly in your palm and prevents slipping.

Choosing a two-speed Andros reel does give a stronger cold forged spool. It does provide a benefit to having more spool strength, especially on two-speed reels that often take more pressure from heavier offshore species. 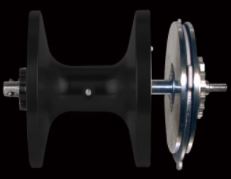 Two-speed Okuma Andros models give the addition of dual force drag. This prevents friction on only one side of the drag, which can limit the full extent of its ability. Dual force drag is another feature that goes well with two-speed reels and more forceful game fish.

The CRC is another element of the two-speed series that improves the value of the reel. This obviously a durability feature that protects the one piece frame. Try to keep those chips in the coating from occuring and you won’t have much worry about saltwater corrosion. 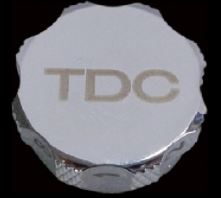 Taking a closer look at the Okuma Andros SE models, they look very much the same. They also use much of the same technology that goes into the other models. All similarities end with the switch to the Tournament Drag Cam. Andros SE reels come in two sizes that feature light line fishing. The precision setting and performance of the Tournament Drag Cam makes it possible to fight strong fish with light line. These drag systems operate at just under the breaking point of your line.

For those who prefer lightweight lever drag reels capable of handling extreme pressure, the Okuma Andros makes a fine offering. Between the single speed, two-speed, and SE models, there’s quite a bit to choose from. Many jig fishermen also prefer the narrow spool, which Okuma does a good job providing in the Andros.

Aluminum frames also offer a durability many anglers can appreciate. They do cost a bit more, but last years longer than graphite if you keep proper maintenance. With helical cut gears that give a fast retrieve, Andros reels are performance machines on the ocean or in the bay.

Star drag fishermen will have to look for a different line. Okuma does not make Andros reels in star drag models. You might inspect the Daiwa Sealine for a low price and great value, or the Shimano Trinidad for a high-performance star drag reel.

The only other drawbacks that stand out are the lack of support for braided line and a short range of reel sizes. It would be nice to see a lighter and heavier reel in the Andros models. It’s also more than possible to fish these reels with braid, or a braid mono combination. Okuma doesn’t provide a tie off on the spool or rate the Andros for braid. Use a bit of mono backing as the first few layers to prevent braid from slipping.

View All Andros Reels On Amazon

It’s already in the article a couple times, but it’s not a bad idea to reiterate. Vertical jigs fly up through the water column using the 6.4:1 gear ratio of Andros reels. They also handle the forceful stop leading to immediate drag engagement due to their dual anti-reverse system. Fly line a live bait with an Andros reel, and you’ll fish will take no problem.

Okuma Andros reels come with a 3-year manufacturer’s warranty. Those anglers that do have to send Okuma products in, report some of the best experiences in the industry. There’s always an exception with customer support issues, but overall the feedback is overwhelmingly positive. 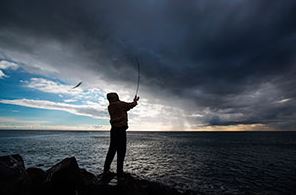 If there is an Andros reel model that meets your fishing needs and they fit your budget, it’s an excellent offshore weapon. Spend a little more than you might on a graphite framed reel and you’ll receive the reward of durability. As for performance, anglers continue to land incredible species using Andros reels. Once your tuna hits the deck, you’ll agree they perform as well as this review represents the Okuma Andros’ abilities.