The release of the first Penn Senator reel back in 1936 would help write the Penn name into history. These days technology produces a much different reel than those Penn Senators of old, and they’re still catching fish after so many years. With a free-floating spool that sits on a live spindle, anglers find that casting or running live bait on a Penn US Senator reel is a breeze. Strong stainless steel gears sit inside a 1-piece machined aluminum frame, resulting in durability that will last for decades.

Intro To The Penn US Senator Reel

The Penn US Senator reel uses a simple yet effective design. It puts technology to work, not with fancy new inventions, but by improving on a basic concept. The US Senator starts with a sturdy aluminum frame, backed up by strength in the stainless steel main and pinion gears. Three different reel models offer anglers a choice of a narrow, standard, or wide spool style. US Senator reels cast like butter and apply up to 27-pounds of drag resistance when it comes time for pulling.

Check US Senator Reels On Amazon

Right off the bat anglers will notice there are only three models to choose from. Penn US Senator reels are very close to each other in size and weight, all sitting at right around 30-ounces. The choice anglers have between models is a narrow, standard, or wide spool reel. And the spool design does affect the reel’s line capacity, as well as offer advantages to certain styles of fishing.

The wide spool Penn US Senator reel offers the most line capacity of the three. It keeps the 50-80 pound test rating for braid offering much more length, between 1425-1025 yards. Anglers can move up to heavier 40-60 pound mono test and wrap on between 580-370 yards. All Penn US Senator reel models spin on a 6 bearing system. They have a gear ratio of 4.3:1 which takes in about 36″ of line per crank. Drags on these star drag reels max out at a generous 27-pounds.

Penn US Senator reels have a sturdy one-piece frame that consists of machined aluminum. A strong frame is imperative against powerful gamefish to prevent twist and locking of the gears. In addition, aircraft-grade aluminum reduces weight while holding up well against rust and corrosion.

Penn continues with the theme of lightweight strength in the US Senator reel using lightweight anodized aluminum for the spool. Penn molds the spools through the forging process, then machines them to a perfect finish. They add line capacity rings to the outside of the spool walls during this procedure. 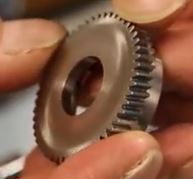 Anglers find strength through and through on the Penn US Senator reel, not to mention resistance against harmful saltwater elements. You can see it in the frame and spool but you’ll feel it when you crank on the stainless steel main and pinion gears. One of the strongest forms of metal in existence, stainless steel also holds up well against corrosion.

One of the most applauded features of the Penn US Senator reel is its free-floating spool. If you want to see it for yourself, watch Mike Rice give the reel a spin at about the 45-second mark in the video above. The reason the Penn US Senator has that almost never-ending spin is its Live Spindle System. Spools ride completely on bearings without any friction to slow them down. You can imagine what this does for casting.

Although Penn rates the drag of the US Senator at a maximum 27-pounds, they believe it reaches up to 30 when all the way tight. A wide contact surface on the drag washers helps give the US Senator plenty of slowing power. Penn puts durability in the drag system as well with their HT-100 carbon discs. They test out to a hundred miles of use without any noticeable wear.

Penn US Senator reels engage with a clutch lever and the drag sets against a dual dawg anti-reverse system. Although anglers might not notice at first glance, they do have harness lugs. The lugs sit inside the frame in a down position making it easier to palm the reel. It’s an easy fix to flip them up if that is your preference.

Anodized aluminum handles offer a couple of different cranking positions and end in non-slip ergo palm grip. US Senator reels include a sturdy rod clamp suitable for graphite or aluminum reel seats as well as clicker on the back sideplate.

View US Senator Reels On Amazon

Penn US Senator reels offer the same reliability as the standard Senator and Special Senator series. Their one-piece aluminum frames, spools, and stainless steel components add a level of durability beyond that of their sister reels. Whether casting the narrow spool model or running live bait for yellowtail with the wide spool, anglers have plenty of support using a Penn US Senator reel. Penn manufactures the US Senator reel entirely in the USA from imported and domestic parts.

There’s no use complaining about the function of Penn US Senator reels. After years upon years of upgrading the Senator. Penn now offers a superb product. If you were to pick out a negative about the US Senator series, it might be its gear ratio. While 36″ per crank isn’t a bad intake of line, anglers could ask for a bit more speed. Especially when you consider how smooth the spool spins.

The Penn US Senator reel covers a decent range of uses in the saltwater fishing arena. With a free-floating spool, their ability to cast is exceptional. Anglers appreciate the narrow spool model for exactly such a purpose. Live bait won’t feel any other resistance than the weight of the line as they run away from your vessel. The wide spool makes a fine choice for tuna up to around 80-pounds or for dropping onto deep rock piles. Match your Penn US Senator with a Carnage II conventional rod or an Ally Boat Rod and you’ll be ready to roll.

The only thing Penn takes more serious than fishing reels are their customers. All Penn products come with a 1-year manufacturer’s warranty. Their online portal is always a good place to begin after purchasing your Penn reel. You can register ownership, contact a reel expert, or submit a warranty claim. With service centers around the world, it never takes long for a Penn reel to be back in action. Penn Senator reels are also one of the easiest to work on yourself, making them good learner models.

Overall Ranking: 90 out of 100 anglers approve of Penn US Senator Reels

While Penn US Senator reels aren’t the least expensive of the different Senator series, they bring durability that the others don’t have. Anglers can ease up on their budget by going with reels like the Daiwa Sealine or Okuma Cortez, but they’ll miss the live spindle on the US Senator. They also miss out on a reel design that will last well over a lifetime with proper care.