Anglers appreciate boat rods for their all-around usefulness on deck. They have tougher builds that can take the beating that sometimes comes with being on the ocean. Boat rods may not have the extra length or fast action for long distance casting, but they can still throw some line out. The Penn Tuna Stick is a boat rod, but it’s so much more than that. One look at the Aftco Roller Guides and the angler knows these are not basic boat rods. Start reading about the Tubular Glass Blank with a Solid Tip design and snap to attention in the following review.

Introduction To The Penn Tuna Stick

As anglers that spend many days on the water each year know, it’s nice to have a few boat rods on deck. If you make way in ocean waters where larger size game species dwell, you’ll want gear that’s capable of fighting them. You might notice the International name on the Penn Tuna Stick. A.K.A. the Stand Up Casting Rod because there’s only one model. Pair it with a Penn International Reel and your monster setup is complete. Good in the fighting seat with rod belt or freestyle on the rail, nothing says you’re ready like the Tuna Stick.

Specs Of The Penn Tuna Stick

With only one rod to inspect, there shouldn’t be any confusion going over specifications. The Penn Tuna Stick is a one piece rod with a tubular fiberglass blank. As the rod blank tapers from the base on up, it eventually becomes solid near the tip. Penn makes a good choice by using 6 Aftco Roller Guides including the tip roller.

For the reel seat, you’ll find a quality aluminum design by Stuart. Stuart also provides the aluminum butt section and the foregrip offers the comfort of EVA padding. Standing from butt to tip, the Penn Tuna Stick reaches a length of 5’6″ and offers a line rating between 30 to 80 pounds. It’s a moderate-fast action rod that rates heavy on the power meter. Penn Tuna Sticks work in the rod holder for trolling and offer an aluminum gimbal to support the technique.

The blank of the Penn Tuna Stick uses fiberglass to form a tubular design. As it tapers and nears the tip, the blank splices from the hollow tubular section into a solid finish. This results in rod action that isn’t beneficial to casting distance or accuracy. It’s perfect for setting the hook, however, inside the mouth of that yellowfin. 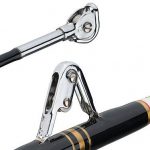 Anglers appreciate seeing quality rod components and Aftco is top of the game. Besides that, the roller guides themselves eliminate line friction as it pulls out with force. This offers a huge advantage and is often a necessity against fish that reach high velocities. The friction on normal line guides from a large Wahoo or other fast predators can cause your fishing line to snap.

Another leader in the manufacturing of rod components, Stuart specializes in parts like aluminum reel seats and rod butts. Penn makes another excellent decision by going with Stuart for the reel seat. They lock expensive reels in and hold them firmly in place when dealing with massive amounts of pressure. 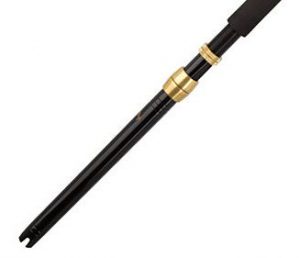 Most butt sections of an offshore rod serve as a lower handle which anglers call a split grip design. There are basically two handles with the reel seat in the middle. You can see that the Penn Tuna Stick has an upper and lower handle. It’s just that the lower handle is all aluminum. There isn’t any grip tape or EVA rubber.

Chances are you’ll have the butt of the Penn Tuna Stick in a rod holder and not pinned inside your arm when battling a fish. Grip tape on the lower section isn’t something that’s really needed for this type of rod. The aluminum gimbal does come with a cover to protect anglers who fish with a stand up fighting style.

The foregrip is where an angler reaches and holds on for leverage against powerful tuna. This is where the EVA grip comes in as a lifesaver. The EVA protects your hands from bruising, keeps a non-slip grip, and gives a cushion for comfort during long battles. 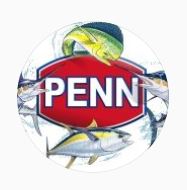 The design and engineering are right for taking the fight out on the ocean and sticking it to big tuna. From its taper to its tubular construction that ends in a solid tip, the Penn Tuna Stick has what it takes to put the wood to heavy fish. Decking out the rod with Aftco Roller Guides and other quality components puts on the finishing touches. Saddle up in the fighting chair or stand your ground on deck. The Penn Tuna Stick won’t disappoint you.

Boaters that don’t frequently fish for larger species might not have a use for such power in a rod. Penn Tuna Sticks have a limit to their casting ability. They can do it, but they suffer in distance and accuracy. There is at least one complaint about price, but it’s actually the opposite case. Price is more than reasonable for these style rods. It’s long-term durability that should be more of a concern.

Best Use – Style Of Fishing

If it isn’t already more than apparent, Penn Tuna Sticks work for big tuna and other large gamefish. The solid tip softens the impact of a strike and allows the hook to bury inside the mouth. Once the fight is on, the power of the tubular blank section does the heavy work and finishes the job. Pair it with a Penn International Reel or switch brands. Reels like the Shimano Tiagra or the Okuma Makaira make superb alternate choices.

Penn delivers top of the line customer service with repair centers located all over the world. Every Penn Tuna Stick comes with a 1-year manufacturer’s warranty. There is no charge for return delivery or repair from a defect within a year’s time. Other conditions may lead to a reasonable repair offer from Penn. You may send your rod in for repair after warranty and pay out of pocket expenses.

Casting Out The Final Thoughts

Overall Ranking: 89 out of 100 anglers approve of the Penn Tuna Stick!

Anglers may know Penn for their reels but the Tuna Stick Stand Up Casting Rod is begging for attention. It deserves its share of popularity due to proven performance on the water. Drop any concerns about landing that trophy due to rod failure when you choose the Penn Tuna Stick. Do your due diligence in maintenance and regular rod inspections to avoid any extra wear and tear. Hope you enjoyed the review, and feel free to leave any feedback in the comment section below.