Welcome anglers to the Valiant, an offshore conventional reel worthy of much more attention than it receives. The smallest and lightest of all their offshore models, Accurate Valiant reels offer anglers a number of benefits. Not least among them is a sturdy compact reel, ready for braided line, that you can fish with all day long. When the moment arrives, the Accurate Valiant packs a big punch.

Intro To The Accurate Valiant Reel

Like the Accurate Boss & Fury series reels, the Valiant offers anglers a wide range of models. This post will cover them all. With 21 different reels to choose from, you’ll discover their uses and major differences. The main feature of the Accurate Valiant series is a small reel made to hold braided line. All conventional in nature, do not discount the Accurate Valiant in your pursuit of large game fish. In fact, their small size yet ultra-powerful infrastructure makes them one of the best reels on the market.

Out of 21 models in the Valiant series, 12 stand out as single speed reels. Looking over the 12 models, however, you may notice there are only 4 different sizes. The smallest is the 300, then the 400, 500, and 600 move up in size respectively. The Accurate Valiant 500 offers a narrow spool model, as do the size 600 reels. Size 600 reels offer the most models with options for narrow and extra-narrow spools. They 600 also has a P (for power) model, which has a lower gear ratio, and two high-speed S options.

One of the goals of the Accurate Valiant is to shed some weight without losing capability. They do a good job which you can see in the starting weight of the smallest BV-300 model. It weighs only 9.9 ounces. The heaviest single-speed Valiant weighs 20 ounces. A maximum drag capacity of 23 on the smallest BV-300 matches the likes of the Penn Fathom Star Drag, and the Valiant moves up from there. The BV-600P gives you a max drag of 32-pounds, thus the P for power along with a lower gear ratio.

Line ratings and gear ratios are the final specs to cover. Using braided line, the smallest BV-300 rates at 325 yards of 30lb test. The 400 and 500 models move up to 50lb braid and the 600 models carry braid of 65lb test. You will find that the narrow spools sacrifice some yards of line. On the contrary, the P (or power) models in the size 600 Accurate Valiant reels offer more line capacity. The S (for high speed) 600 models give even more yards of line, but they switch from braid to 20lb mono. Gear ratios are 6.1:1 in all models except those with the Power (4.1:1) & Speed (7.1:1) designations.

Accurate Valiant two-speed reels come with fewer options, mainly because they lose the concern for power and extra speed. They start a bit larger with a size 400 instead of 300 and top out with two models larger than any in the single-speed reels. Extra gearing always adds some weight and the smallest BV2-400 sits at 14.3 ounces. The heaviest BV2-1000 weighs only 29 ounces and shows how light a large reel can be. Note that anglers still have the narrow spool option with Accurate Valiant two-speed reels. 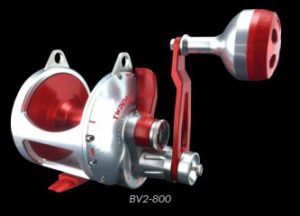 Offshore anglers know the long hours they must put in on the open ocean to get the results they desire. It’s no surprise that reel makers strive to build a lighter product. But with a lighter reel, how do manufacturers keep from losing the strength needed to land powerful fish? Each takes their own approach to tackling these issues but not many do it better than the Accurate Valiant.

Accurate Valiant reel design includes an aircraft grade aluminum spool with a sleeve that sits inside the reel frame. The sleeved spool adds stability and keeps the spool bearings in exact place. The sleeve is basically a hollow tube like a small piece of plumbing pipe that sits over the main gear shaft. Having a sleeved spool increases the free-spool ability and allows extra distance when casting.

Accurate Valiant reels come equipped with 7 ABEC stainless steel shielded bearings as well as a new stainless anti-reverse bearing. Precision gears mesh like they were born together and consist of stainless steel as does the main shaft. These features add both strengths in torque and as an anti-corrosive measure. 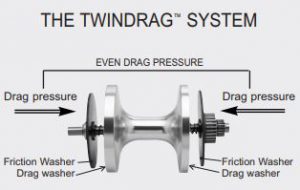 The Twin Drag system allows for the addition of several beneficial factors. You get a more even disc wear for one, and you also get a smoother release of your line. Having the Twin Drag feature comes in even more handy with the heavier models. When you need to put more pressure on the brakes, you’ll appreciate the Twin Drag.

A feature exclusive to the two-speed models, the Accurate DirecShift makes it possible to switch gears without a hitch. That is to say, not only is the placement of the switch in an easy to tap location, it also doesn’t miss a mechanical beat. The crossover from high to low gear, or vice versa, is smooth as can be.

A list of positives that goes on and on is the sign of a high-performance reel, and the Accurate Valiant has a long list indeed. The lightweight feature is only a bonus if the reel doesn’t lose out in performance. Accurate pulls this move off in spectacular fashion with the Valiant design.

Besides that, Accurate uses high-grade material and shows a strong level of craftsman throughout the entire series. Whether you fishing needs tend towards a two-speed reel or you’re able to make due with one speed, the Valiant puts forth some fine selections. Valiant reels are also available for left-handed anglers. 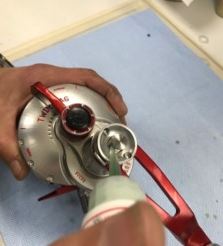 In all honesty, the Accurate Valiant offers top value for the asking price but it isn’t cheap. The Valiant is more than worth every penny, but still, the cost is a downside if it falls out of an anglers price range.

This is one to save up for if such is the case. Anglers that prefer fishing with mono ought to know that the Valiant is for braided line (except the high-speed models). Accurate Fishing does not make Valiant reels in star drag models.

Accurate Valiant reels cover most of the needs that an offshore angler might run into. You could very well choose a selection of Phenix or CalStar rods to go with different Valiant reels and be fully prepared offshore. There could certainly be exceptions for larger and smaller needs, but the Valiant serves a wide range of styles. Trolling, topwater casting, vertical jigging and fly lining offer some specific examples.

A 2-year free service program makes a huge step forward in the support category. All Accurate Valiant reels come with this warranty. Furthermore, Accurate provides Valiant reel schematics on their website, a video on repair and general maintenance, and an open support portal. It doesn’t get much better than that.

94 out of 100 anglers approve of Accurate Valiant reels

When you’re ready to take offshore fishing to the next level and you want equipment that will hold up, you won’t go wrong with Accurate. During those long hours of grueling fishing, you’ll appreciate their lightweight build. When you hook up with a surprise gamefish that has more fight than you might anticipate, the Accurate Valiant will most certainly pull through.