From Lawn to Hook – What is a Grub?

Everyone has seen them, perhaps not knowing them by name. Gardeners despise them, but kids love them. Found under lawns, rocks, and dirt, fishermen have long turned to them for bait. They look like short thick worms, but exactly what is a grub?

Feast your eyes on the following run down about everything grub related. Find out what they are, where they come from, where they are found, and most importantly how they can be used to catch fish!

The definition of a grub in laymen’s terms is the larva stage (or worm stage) of a beetle. When a beetle hatches from its egg it is first a grub, or beetle larva. Beetles come in all shapes, sizes, and colors. They also come this way while in their larval form giving quite a variety to their 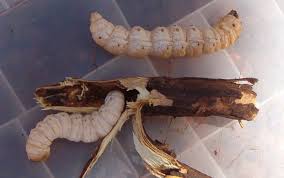 appearance. Common grubs are white grubs which are know to be quite devastating to lawns. Other grubs might not be so conspicuous, but they can all work wonders triggering a fish to bite.

Most grubs look like short and hairless caterpillars,
but they like to live under ground. Grubs often curl up when exposed making a kind of C shape. They vary in terms of lifespan, but many grubs can spend several years before the metamorphosis to a beetle takes place. They can be found in almost every area of the world. Grubs prefer soft, damp dirt and can be found under grass, rocks, dirt, old stumps, fallen trees, etc.

Grubs from a Fisherman’s View Point

While the gardener is trying to kill these pests and keep them from destroying his lawn or crop, the

fisherman sees them as the next best thing to night crawlers. Yes it’s no big secret I guess that a lot of fish like to eat worms, and grubs are basically that. They’re close enough it seems, because fish don’t seem to make much of a distinction.

When it comes to fishing with grubs, there are two different classifications an angler should be aware of. The first and less common is fishing with live grubs. You won’t hear as much about this, but fish don’t care what info is out there. They’ll eat them with pleasure. The second is all about fishing with plastic lures. Specifically what’s known as grub lures. You’ll often hear single or double tailed grub associated with these kinds of plastics. They work as well or better than live grubs. Getting a start using grubs for fishing takes nothing more than an affordable spinning rod an reel combo.

Live grubs will work to catch any kind of fish that forages for worms and insects as a food source. You can use grubs as bait by employing almost any set up you like. Bobbers, fly line, or the Carolina rig are all good techniques to use. Many grub larva will pop when you pierce them, so hook them once in and back out to keep them set.

This kind of fishing will require place casting to a spot you either see fish, or believe is holding fish. Sit back and wait for a bite. Give it some time, then move and try a different area if you don’t see action.

Fishing with artificial grubs is also known as fishing plastics. The grub lure really doesn’t look that much like a live grub. The lures are made with tails that give a spinning look by curling as they are propelled through the water. I believe it’s this spinning effect that draws strikes. 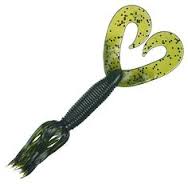 One thing I love about artificial grub fishing is that I’m never standing around. I do a lot of casting and usually get to pull on some fish, but I’m never lazy. Another feature of fishing a plastic grub is the ability to catch predatory fish that believe it’s something swimming through the water. I get halibut and spotted bay bass that would be much less likely to eat a live grub. Trout and fresh water bass have no problem eating a live or a plastic grub.

What is a Grub Going to Catch?

There will be a distinction between species of fish you catch depending on whether you’re using live or artificial grubs. This will be the same in either fresh or saltwater bodies that provide habitat for multiple species of fish. The difference between the two lies mostly in how the fisherman is able to present them to the fish.

Using live bait mostly requires that you use weight to get your bait out when casting, and into a desired location. It then sinks to the bottom where it lays in wait for foraging fish to swim by. Now it’s not to say that larger predatory fish don’t forage at times because they do. This can often be a result of seasonal behavior. You will tend to catch foraging types of fish more often than not with this kind of technique.

When you’re fishing an artificial grub as a lure, you will tend to get more reactionary strikes. This means you will catch fish that are more predatory in nature. They’ 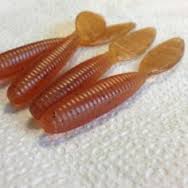 re used to having only a second to decide whether to attack or not. The spinning tail of the artificial grub is especially suited for
reaction strikes. You can slowly bounce it off the bottom, or swim it at any speed desired. The tail works effortlessly either way, and drives fish mad.

Wrapping up the Grub

Any landscape artist or gardener has surely come across these pests in their everyday work. They’ve mentioned them in bellyaching conversation and been asked in return, What is a grub? It’s quite interesting that the same critters that give these professional tradesmen so much grief can be valued by fishermen. I do hope you’ve enjoyed the bit of info provided, and I suppose the moral of the story is to get those grubs out of your lawn and into the water.