Headlines state that Cribbs Jigs are taking fish along the Central California coast hostage. The question is, why not Southern California? Heck, why even stop there? If Cribbs Jigs is a name in lures that is new to you, perk up your ears. The clear coat hype definitely raises the value of Cribbs Jigs lures due to its protective nature. Cribbs Jigs can bang against rocks or take the snap of a lingcod’s jaws, no problem. They’re incredibly durable and difficult to chip, but the clear coat advantage doesn’t stop there. If all it took was to throw clear coat on a lure, companies would be selling them by the boatload. It’s the design of the shape and flashy colors that do Cribbs Jigs such justice. The clear coat enhances already attractive patterns by making them shine with a glossy look. Let’s get into all that Cribbs Jigs offers.

There’s nothing too complex about Cribbs Jigs. They have a simple yet effective design that pulls rockfish out of their holes for a hopeful meal. Cribbs Jigs are 1 size and come with your choice of either a single siwash hook, or treble hook with a squid teaser bushing. Put a piece of squid on the siwash hook or use the action of the squid teaser to entice fish like sheepshead, cabazon, and oversized lingcod. Get a Cribbs iron lure to the bottom and start bouncing, jigging it up and down. A Cribbs iron jig will get hit by wandering yellowtail on the bottom, as well as on the retrieve back up.

Besides having a choice in hook end, Cribbs iron lures come in different weights. The shape is consistent across sizes, meaning there is only 1 type of lure model. However, they come in several different color schemes as you can see below:

Cribbs iron jigs have a distinct minnow shape that cuts and moves through the water. They come in a range of weights that start as low as 3 ounces. The heaviest Cribbs weigh up to 12 ounces. Be sure to check that the color pattern you like is available in the weights you need. Go with the treble hook option and get the squid teaser that comes along with it. Single siwash style jigs do not come with the skirt.

Pros And Cons Of Fishing With Cribbs Jigs 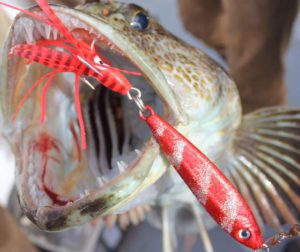 The design in shape starts things off right with Cribbs Jigs, and the range in weights makes them versatile within their purpose. Bucktail jigs work great for bottom fishing of the same style, but the larger Cribbs style will bring more keepers out of the rocks.

There’s no greater value in a fishing iron, especially the price. This is a sound fact considering the layers of clear coat that protect each lure. Tie strong knots and avoid hooking the bottom. A Cribbs jig will last as long as you do.

There may be situations where the minnow design isn’t getting the bite. A bucktail jig, strip of squid, or live anchovy does the trick in these cases. Although Cribbs offers good weight range in their jigs, there’s only the one design. So far. It’ll be interesting to see what else Cribbs creates in the near future. My other hangup and warning is to simple watch out for rocks on the bottom. It’s an expensive investment to make, only to lose that battle (and lure) to a rock pile.

Which Variety Of Fisherman Can Make Use Out Of Cribbs Jigs? 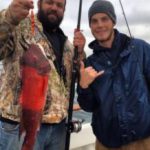 Cribbs definitely has its place in offshore bottom jigging and their jigs earn that valuable tackle space. The variety in color patterns makes a Cribbs Jig useful outside of their comfort zone. Drop the right pattern on some low hanging striper that seem reluctant to feed and hook up.

Get a Cribbs Jig down to bottom and bounce it in front of giant lake trout. Remember, the squid skirts glow in the dark and all sorts of species will take that for bait.

We all love that website with a place to leave an email or live chat customer support. Cribbs is working at least on the website part. I know. I’m looking forward to it too. In the mean time, you may visit and send messages on their Facebook page. Cribbs Jigs also provides a contact phone number at 805-208-2208.

The Verdict On Cribbs Jigs

Overall Ranking: 94 out of 100 jig fishermen approve of Cribbs Jigs for bottom fishing.

Cribbs Jigs land in the mid to mid low price range among iron lures of similar quality. The fact that durability is near forever adds huge value to every Cribbs Jig lure. It’s not like Jeff Cribben didn’t put these jigs to use before they made the market either. Several sponsored fishing trips over the last couple years show proof of just how effective Cribbs Jigs can be.